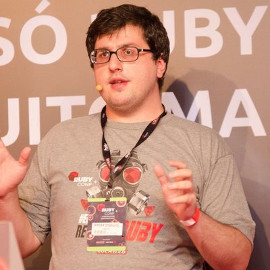 Spoiler: This is an opinionated post about programming languages.

I’m a Rubyist, i love Ruby, the community, the productivity and lots more. For more than 4 years i professionally write Ruby to get paid and i really like to keep it that way but i’m also aware that languages/tools are destined to be replaced.

In 2015 we’ve seen lots of blog posts starting like ‘How we moved from Ruby to X ..’ . Well that’s the living proof of people looking for better alternatives. We shouldn’t take these as ‘Ruby is not good’. Quite the contrary we should be aware of that ‘X’.

In most of those the ‘X’ is Go, Rust, Elixir etc.. I hereby claim that: As a Rubyist that that ‘X’ should be nothing else than Crystal.

Crystal is %90 Ruby with

Let’s start with an example

This is how you’d do fibonacci (without memoization) in Crystal. Did you notice that the file extension .rb? Well at the same time this is Ruby code :)

Let’s run to see it working on Ruby and Crystal.

Awesome. Let’s take a look at the time taken.

Wow! That’s pretty awesome. We practically did nothing and gained 20x performance.

But wait what if we turn on LLVM optimizations

Native code rocks. We build the Crystal program with all the LLVM optimizations and run the generated native code in this case ./fib and now we are nearly 25x faster than Ruby :)

That’s a really simple demonstration and a big reason of why that ‘X’ should be Crystal.

As a web developer i was pretty curious to see how a web framework similar to Sinatra would benefit from this performance. So i created Kemal.

To understand the true potential of Crystal and make something useful i thought that something like Sinatra would be awesome thus Kemal is born.

It’s literally as simple as Sinatra.

but with a big performance difference :)

Crystal is in alpha stage and the latest stable version is 0.9.1.

Most of the standard library is complete and stable. It’s not yet production-ready but you can use Crystal today.

A big thumbs up for Crystal is that it’s written in Crystal. You can easily read the source code of Crystal and contribute back it by opening pull requests / issues.

The community is really nice :) It follows the roots of MINASWAN and currently has an irc channel (#crystal-lang on freenode) and a mailing group.

If you’re reading this far then i’m thankful for your time :) I really hope that you enjoy using Crystal soon. You can ask me any questions and reach me at @sdogruyol

P.S: You can support Crystal development with this fundraiser.

You May Also Enjoy

I am the author of Kemal. Fast, Effective and Simple Web Framework written in amazing Crystal programming language.

Building a realtime Chat application with Crystal and Kemal

As we all know that the web is getting bigger and the information is being consumed really fast. Most of the web applications are in need of realtime updates...

Rust vs Ruby: Building an API

I’ve been itching to write this blog post for a while. Now that Rust is 1.0.0-beta the time has come.

Nowadays building an API is a really common task. If you’re a Ruby developer chances are really high that you’re already using Rails for an API.